I could listen to the Ranmo sing for hours.  The melodies are somber. They are not joyless, just serious like some of our old hymns.  They know life can be hard.  They live it every day.  But they know God is a good father and worship despite hardship.

It took four days to get to Indorodoro.  Rain season is not supposed to have started yet.  Our trip began by airplane in the Eastern Highlands.  When we landed at Moorehead the people there told us the pontoon barge (used to float vehicles across the river) was sunk (again), and no vehicles could go that way.  Fifty kilometers of swamp and flooded rivers were between us and the village; rain season is not supposed to be here yet.  So we flew to Bensbach, a few kilometers from the Indonesian border and the western-most river in Papua New Guinea.  The next day we were able to hire a dinghy which took us as far as Weam.  The trip took several hours following the river through flooded marshland as flocks of birds flew up and away from the boat.  Herons and hawks, rare birds of paradise and parrots of all kinds kept their distance as the boat made its way through the marsh.  Several hours of travel on the river and we only passed one village; there is more wildlife out here than people.  It’s hard to discern the difference between the river and flood land but our boat operator knows it better than I know my house in the dark.

We arrived at Weam, a government airstrip routinely shut down due to lack of maintenance.  The Papua New Guinea Defense Force has a unit stationed there but they’ve not been resupplied or paid in months.  They buy food from the locals and fuel from Indonesia but their cash flow is running low.  After two days in Weam we were able to pay some locals to go to Sota (Indonesia), to buy fuel for the Defense Force Land Cruiser.  It has no brakes and even though they are on their second transmission third gear howls like a banshee.  The front drive shaft and axles have been removed reducing it to two-wheel drive status, but it runs okay as long as it has fuel.  I learned later that truck is only one year old. 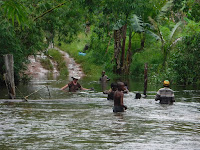 Half way between Weam and Indorodoro we came to a village called Gariam.  At least now we were in the same language dialect as Indorodoro and Jessica could communicate clearly in Ranmo.  In Gariam the creek was flooded to chest deep over the bridge.  The bridge consisted of two logs per tire and we had to feel where they were in the murky water with our feet.  If the truck could not stay on the logs the water depth was over head.  End of the road; time to walk. 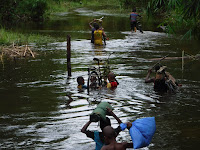 Because this village was within Jessica’s translation project the people knew her and were willing to help.  After crossing the flooded creek they loaded our supplies onto the makeshift racks they use on their bicycles and headed for Indorodoro.  The rest of the way was a mix of flooded road and occasional dry.  Though mostly not more than ankle deep the weather shifted from monsoon rain and wind that we could hardly talk over to dead calm sun and steam rising from the road, all within a few hours.  That last stretch took five hours to hike.  We had finally reached Indorodoro where we could begin our village stay. 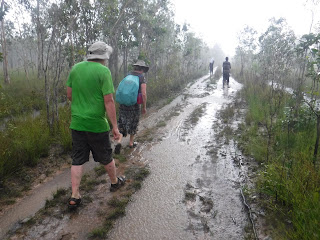 A baby died the day we arrived.  The baby was only a few hours old.  And the young mother soon followed.  In Ranmo there is a term for a friend that is closer than family.  This young woman was that friend to Jessica.  The conditions that we had to navigate to get here are the same for the locals to get out.  Had they been able to get to Kirua airstrip in time there might have been a chance to at least fly the mother to a mission hospital.  But to carry an unconscious adult through a swamp is difficult and when they came to the first river crossing they had to stop and build a raft out of bamboo.  She died in the jungle only part way there.

The funeral and hauskrai consumes village life for some time afterward.

The people’s grieving tradition involves loud and prolonged wailing.  It goes on for hours over the course of several days and can be heard throughout the entire village.  As family members arrive from distant villages they begin their wailing at the edge of the village and continue for quite some time after reaching the body.

The mourning in this area sometimes takes on a musical temperament.  Rather than voiceless sobs, loved ones sing out the things they miss or activities they used to do with the deceased.  Ruth’s father banged the skulls of cassowary and deer together while bobbing along similar to a traditional dance.  He was crying out “Daughter!  These are the meats I used to prepare for you.  Cassowary and deer I used to feed you.”

Ruth’s elderly aunt carried a yere on her back, a woven basket full of garden produce.  She sang about how they used to plant and harvest together and that her brother’s daughter would no longer be able to help.

All of Ruth’s loved ones had an attribute, a story, a song.  And they were all expressed simultaneously in a cacophony of singing, wailing and sobs.  The coffin was being sawn and hammered together just a few feet away, repurposed from a wooden table.  And the sound was a part of the chaos.  Just behind the house, a few feet in the other direction, they dug the grave, water and soupy mud flowing in as fast as they could scoop it out.  Little boys bailing water, men digging with shovels.  Some threw themselves over the body or coffin or grave.  And the crying continued long into the night.

There are missionaries who claim these practices should be abandoned within communities which claim to be Christian.  They liken it to one who grieves without hope; a pagan ritual.  I disagree.  These traditions show that the deceased is loved, that they are missed and that the person is valued.  They show these things.  As Westerners we only say these things.  The Ranmo could say that our lack of apparent emotion indicates a lack of love for the deceased.  They could claim that our stoicism is indifference to pain or death or suffering.  They could say that if we love the person we should show that we love them and not just say it.  But they don’t say any of those things.  They say, “You are not from here.  Your ways are not like our ways.  You grieve the way you grieve and we grieve the way we grieve.  And that is okay.”

There is much to be learned coming to a place like Indorodoro.  And we are not always the teachers.

Thank you Evan... for the whole story and wisdom in the cultural translation.. May God continue to move in and through even back to the Western world with such wisdom.

so wonderful to hear a detailed account of getting to Indorodoro. Much harder than the time our survey team simply rode in on bicycles one day. Also, great to hear you describe the hauskrai. Such a sad time for the community and Jessica.