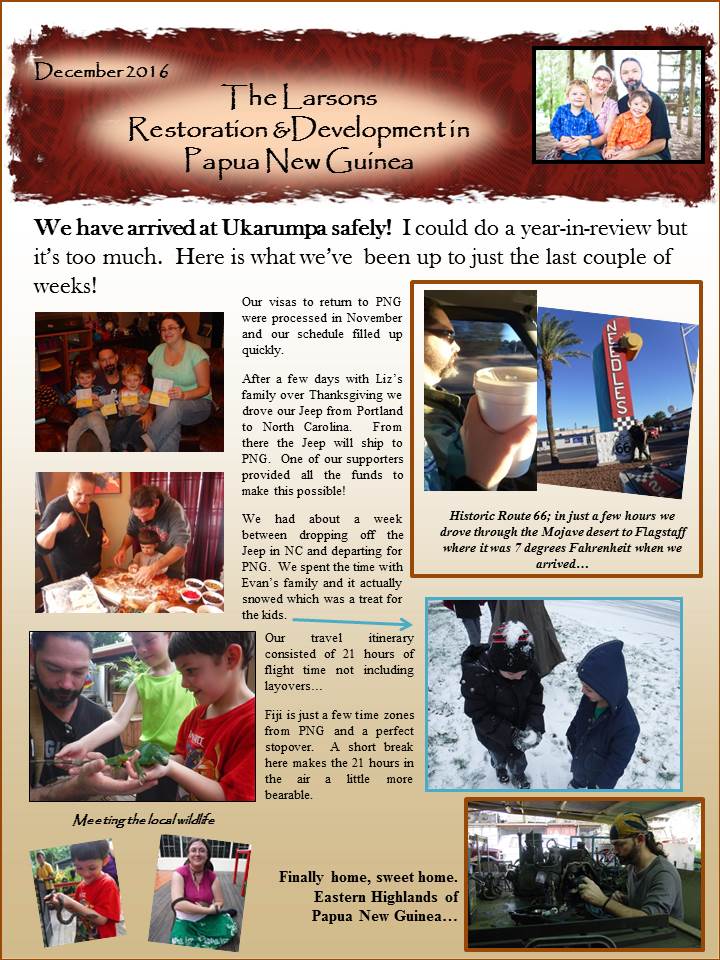 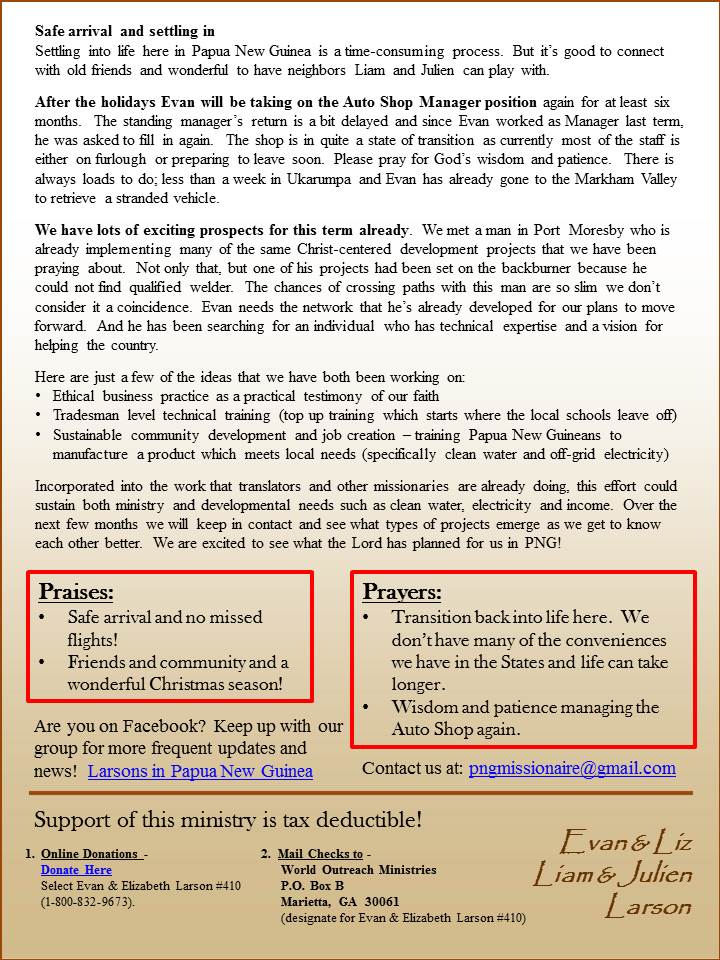 A bit ago my mom gave me the book Evidence Not Seen by Darlene Deibler Rose. For those unfamiliar, it is Darlene’s story of her time in a Japanese POW camp in (at the time) New Guinea (now the area she was imprisoned at is part of West Papua – the Indonesian side of the island).  The effect it had on me was one similar to when I read The Hiding Place.

I experienced confirmation and encouragement during at a time that has been, to put it mildly, strenuous, for our family. For those who don’t know, Evan has been working 6 day weeks off and on (more on than not) for a couple of months. This is due to continue through June. We are also marking a bit over a year of being on furlough, several months longer than we intended on being here. We know that we are still in the US because it is not right time for us to return, though sometimes this knowledge isn’t enough to stave off the feelings of frustration and sadness we feel at not being able to get down to work with the ministry in PNG.

We also are reminded almost daily, we are the parents of two amazing TCK’s (Third Culture Kids) who, the longer we live in transition between two worlds, bring even more challenges into our lives. When Liam tells me, “I miss my PNG friends, but I know when we go back, I will miss my American friends.” Or when Julien says “I want to go on the jet plane to Uka-grumpa (Ukarumpa) today. Why can’t we go today?” My mama heart just breaks and struggles to know what to say.

All this has been compounded by my health struggles which remain, so far, partially a mystery to us going on for a year and half now.

Being in this place of feeling two steps forward, three steps back, it was uplifting to read such insights as: “I was to discover, however, that when I took my eyes off the circumstances that were overwhelming me, over which I had no control, and looked up, my Lord was there, standing on the parapet of heaven looking down. Deep in my heart He whispered, ‘I’m here. Even when you don’t see Me, I’m here. Never for a moment are you out of My sight.’”

What a comfort! It is an assurance I am working on adding to the running loop in my head of heartening thoughts to turn on in times of doubt.

And what a joy it has been to be able to continue to have opportunities open up to us to share with folks here, why we are working so hard to return to a place and people we love, despite the wounds we have incurred (some we are still healing from), while serving there.  Often, after sharing the beauty and the pain of our first term,  I am asked, “So, you’re going back because…?” The first response that pops into my head was reaffirmed in Darlene’s book. Being where God wants us to be is better than being where we are “safe”. Because the reality is, bad things happen everywhere; and bad things happen even when you are walking in obedience to God. But walking the road that is covered by His Will is the best thing for us all, regardless of the risks and perils. For us, we believe, that path leads to returning to PNG to come alongside God’s people there in their journey of holistic restoration to Him.

Thus, I will try my best to live in the moment and place God has asked me to dwell in now, and learn, so that I will be truly ready for the day when I rejoice with my Papua New Guinean sisters and brothers like Darlene when she first came into the valley of the people group she and her husband were to serve: “I raised hands, waving to the people. My cheeks streaked with tears, I started running down the mountainside, singing at the top of my lungs, ‘I’m home! I’m home!’”
Posted by The Larsons at 2:20 PM 2 comments:

Whom shall I fear?

I have never been a soldier in a war, and I certainly do not claim to know what it is truly like. But from talking to, listening to, and reading accounts of veterans from different conflicts, I have gotten the sense that, at least in one respect, being a missionary is the same. You will never be the same person you were when you went as when you come back.

I am beginning to realize that for my situation, it has been ultimately for the better. I certainly did not feel that way many times while in the midst of circumstances that were cracking, breaking and at times completely shattering me. But in the end I have emerged feeling very much like a piece of kintsugi pottery; Kintsugi is the Japanese art of repair using a lacquer mixed with gold, silver or other precious metal powder. It is done in this way so that not only is the broken part not hidden, it is emphasized as a part of the object’s history of its existence; accepting that flaws and imperfections are a part of life and part of the story.

In the same way, we, the vessels of God do not come through life unscathed. And rather than hide the wounds, we ought to allow God to purify them and repair them, acknowledging the process and the end result as part of who we are now.

To that end I wanted to share a song and scripture that have been a help to me during these last couple of weeks as the pace of our journey back towards PNG has picked up. We usually attend both a Sunday and a Wednesday night service.

Firstly, where I got the title of this blog from:
The Chris Tomlin song: Whom Shall I Fear (God of Angel Armies)
Every time we sing it in church I feel encouraged to continue on, to not let the fears hold me back.

So, when I was looking up the lyrics to post here, I was delighted to come across a video where Chris Tomlin is talking about writing this song, and there were two parts that really hit home for me. First, he said that he had decided he wanted to write a song with his friend, Ed Cash (whom he has written with before). When he texted him, Ed texted back how weird it was for Chris to ask because in the middle of the night the previous night when his wife had woken him up asking for prayer because she was feeling as if there were things coming against her. While he was praying he felt inspired to start singing a chorus that came into his mind. And in the morning he had thought he should send the portion of the song to Chris. So, they worked together and what resulted was Whom Shall I Fear. Secondly, Chris went on to say how some songs, like this one, are inspired and are like prayers.

Both of those points struck me and are true in my life. I have more times than I can remember, woken Evan up and asked for him to pray for me, for our family. And, though I make absolutely no claims on being a great singer, when I do, often it is a prayer, a cry to God to work these things in me. Give me strength, faith, endurance, courage to continue to step into this life I never imagined having, but choose out of obedience to Your Will.
"Whom Shall I Fear (God Of Angel Armies)"

Whom shall I fear

Whom shall I fear

That is the point isn’t it? We are showing our brokenness on the outside, where people can see, relate, and hopefully feel that if someone doesn’t have to be perfect to be a friend of God, all of us should be encouraged to seek Him too.  And it goes further than that.

In 2 Kings 19 Jerusalem comes under siege by the Assyrians. Before this happened King Hezekiah, who knew the Assyrians were coming, had the part of the spring of Gihon which was outside the city walls be blocked off and routed through the west part of Jerusalem in a tunnel (which still exists today) so that when the siege came, the people would have fresh water. There is reference made to this in 2 Chronicles 32:30. Even with this, Hezekiah needed encouragement, which he got in the form of a prophecy sent to him, recounted in 2 Kings 19: 32-34.

I believe that God doesn’t just come along at the end and repair us. He is with us through the times where we are getting tumbled, trodden and beat. He has provided us with an internal spring, a river, like the spring of Gihon that continually offers us refreshment, comfort and solace when we need it. And when we are not in dire straits our gates should be open to offer it to others.

Last night I was listening to a sermon on the book of Nahum. It has been such a cool thing to dive into the “sticky parts” of the Bible as the pastor likes to call them; because they are the portions which don’t get much read, much preached on, so the pages aren’t ever broken from their sort of stuck together state that all the pages start out like when the Bible is new. But I have come to realize, they are sticky for another reason. Sometimes the truth that emerges can be tricky and hard to know what to do with.

In Nahum 1:3 it says “The Lord is slow to anger and great in power; the Lord will not leave the guilty unpunished. His way is in the whirlwind and the storm, and the clouds are the dust of His feet.”
At first I was only struck by the second part. In Papua New Guinea, the skies are so big. When a storm or wind comes through our valley it is indeed awesome, and the clouds are immense. When the dry season comes and there is dust everywhere, and there is need for rain, there are fires lit in the tall kunai grass on all the hillsides. Unconfined fire crackling and being whipped up by wind, it is the first time I could truly visualize “tongues of fire” spoke of in Acts 2:2-3. It is tremendous to know that a God that is so big, so powerful, He is greater than all these things, and is IN those times where we are feeling surrounded in the midst of a storm.

I pray you are blessed and at peace. Thanks for reading.
Posted by The Larsons at 1:44 PM 1 comment: